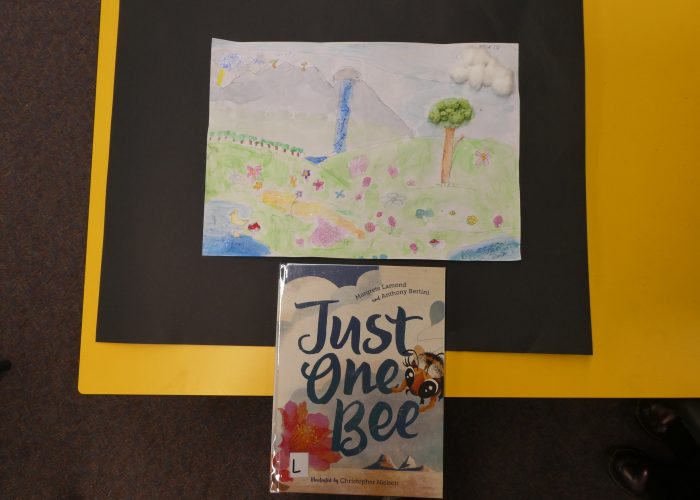 I chose this book because I liked how one bee made a difference. I chose to respond in this way because I thought it was fitting for Just One Bee. The materials I used were: glitter, paper, cotton buds and watercolour pencils. An interesting fact I learned is that one bee can make many flowers. I liked Just One Bee because she was persistent. I think the author wrote this book because they wanted to show young children that if you work hard you get things done quickly. The message in the book is important because it shows that you can make light in a dark place. I think the illustrator did a good job at all the drawings because they are creative. I liked how the drone acted because he was rude and mean at first but then he became nice.
Emma Yr 4

I chose this book because I think that it’s colourful. I chose to respond this way because it’s a bee in the environment. It’s pretty and fun. Some materials were glitter, tissue paper and cardboard.
Cooper Yr 4

I chose this book because I liked that it showed how such a small thing can do such big things. I chose to respond in this way because I think it shows what beauty can come from small things. I liked the illustrations because they told a story of their own. An interesting fact I know about bees is that they dance to communicate. They are really important because they pollinate plants and support the food chain. I think the author created this because they wanted to show how important bees are and how anything can make a difference. The book’s moral is important because it’s really inspiring. I liked One Bee because she was really courageous and committed. The materials I used were glitter and paper because glitter is really nice and it makes a wonderful sensation.
Sebastien Yr 3

I chose this book because I really liked the colours and the meaning. I chose to respond in this way because I wanted lots of colour and different mediums. The thing I liked about the illustrations are that the name of the things are the same. The message in this book is important because it is like saying “you can do anything you put your mind to.” I liked the One Bee character because they did what they put their mind to. I think the authors wrote this book to tell people to not let others stop you, and to entertain. The materials I used were tissue paper, glitter, watercolour paint, watercolour pencils, wool, cotton balls and oil pastels.
Hannah Yr 4

I chose this book because it tells a very good story. I chose to respond in this way because the artwork has lots of different elements. An interesting fact I learned is that bees help the world. I think (the author) wrote this book to show how important bees are. The materials I used were glitter and tissue paper.
Sera Yr 4