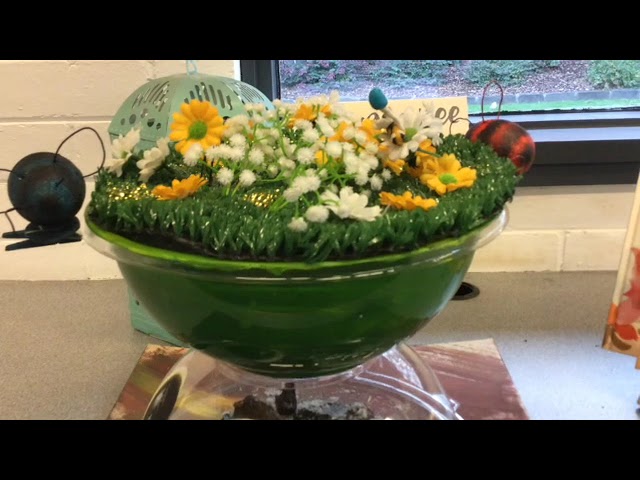 ‘Just One Bee’ has two distinctly contrasting environments and personalities. ‘One-bee’ is hopeful and optimistic. She is a visionary, whose dreamscape is lusciously filled with an abundance of flowers. ‘Other-bee’ is a pessimistic, dream-crusher.

As a creative team, we aimed to emulate the two contrasting visions and moods between ‘One-bee’ and ‘Other-bee’. In the dome below, the landscape is dusty, static and caged in breathlessly. In the dome above, the landscape is flourishing with colourful plant life. It is upliftingly open-aired – just like ‘One-bee’s’ rhythmic voice.

Both bees are seen hovering on the edges between both worlds. A closer glance will reveal a ‘One-bee’ miniature hovering amongst the lush dreamscape whilst the small-minded ‘Other Bee’ is trapped in the arid world he cannot see beyond.

‘Other-bee’ is also distinguished by his blue-grey weather-beaten umbrella. We have placed an umbrella in flight above the dome, but it isn’t full-coloured. The palette is inspired by ‘One-bee’s’ positive influence on ‘Other-bee.’